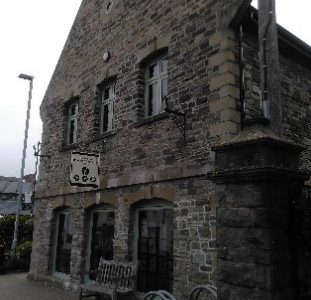 Crickhowell Resource Information Centre (CRiC) is a registered charity, company limited by guarantee and is run by a voluntary Board of Trustees. The building is situated in Beaufort St which is the main thoroughfare running through the small vibrant market town of Crickhowell.  SDF has previously supported CRiC through inception and development from the Telecottage movement established during the 1990’s, initially with revenue funding for the Project Development worker and later for a management post when the new centre opened in 2006.

CRiC has since this time developed into a busy, successful centre which has met and exceeded its earlier projects outcomes. It is now a thriving information centre, open 7 days a week, employs 4 part time staff and has a team of over 50 volunteers.

The application to SDF in 2017/18 was to support some urgent remedial stonework on the exterior of the building. A previous application of lime mortar on the centre frontage had deteriorated to such an extent that it is a health and safety concern.

Examples of the work required.

The centre is visited by over 50,000 people each year and this repair work has ensured that the building has remained open and has not deteriorated further.