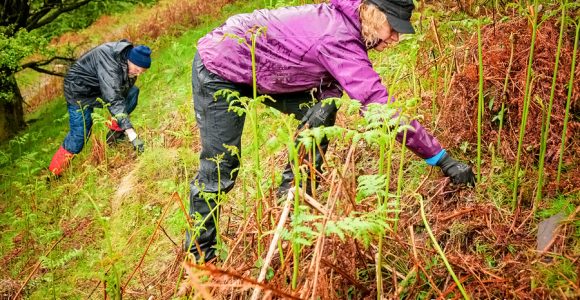 What is an Invasive Non-Native Species?

A non-native species is a species that has been introduced into the country by human intervention (either deliberately or accidentally) since the end of the last ice age, approximately ten thousand years ago (GB non-native Species Secretariat).

Not all non-native species cause problems.  But a few of them have negative impacts on our countryside, these are considered invasive non-native species (INNS). This group includes the real headline grabbers such as the pavement destroying Japanese knotweed, the river bank dominating Himalayan balsam and the hazardous to health Giant hogweed.

Why are these three species a problem?

The harmful impacts these three species can have vary. Himalayan balsam outcompetes our native wildlife, resulting in dense monocultures along the river often spreading away from the river banks. As the plant dies back in the winter it leaves bare ground which is susceptible to erosion which can lead to the loss of large sections of river bank. The flowers of Himalayan balsam are also attractive to bees and so can bias them away from native species.

Japanese knotweed is a similar danger to native vegetation, it grows extremely rapidly, up to 4cm per day and can reach 3 metres tall by June.  It smothers native vegetation underneath it.  Knotweed also dies back in winter leaving bare areas of riverbank. Another problematic aspect is that it can grow through weaknesses in concrete and asphalt damaging structures.  Because of this trait, the presence of knotweed on a property can even lead to people not being able to get mortgages.

Giant hogweed was introduced from South-west Asia and again has a very rapid growth rate; it can grow up to 5 metres tall. It too dies back in winter leaving bare riverbanks subject to erosion.  One of the nastier aspects of giant hogweed is that it contains a toxic chemical which sensitises the skin and leads to severe blistering when exposed to sunlight.

What are we doing about it?

Our invasive species project ‘Invaders of the National Park’ runs from 1st April 2018 until January 2020.  The purpose of the project is to establish a pilot project for surveying and controlling invasive non-native species (INNS) in the Usk and Tawe river catchments, working with other projects and organisations to develop a collaborative invasive species partnership approach. Ultimately, we will be looking at how INNS can be managed long term.

Our project will tackle these species where they occur on National Park land in the Usk and Tawe river catchments, whilst offering advice and assistance to other landowners with these problem species on their land helping them with identification and advising on best methods of control.

We want to work with partners, landowners, volunteers and the members of the public to prevent the spread of these three species and avoid the devastating habitat and biodiversity loss they cause.

What can you do to help?

The headwaters for both the Tawe and the Usk Rivers arise within the National Park.  Given the invasive nature of these plants and their ability to spread easily along water courses, it is important that we work with other partners in the area to tackle these plants from the top of the catchment downwards in a systematic way. To do this we need a good baseline data set to try and build up an accurate picture of the scale of the work needed in the Tawe and Usk catchments not just of the invasive species records but also of areas that have been treated, how they have been treated and with what success.

To do this we need your help. Do you have recent records for these three species? Have you cleared any of these species on your own patch of river? Are you part of a volunteer group that already does this kind of work, or would you like to get involved in tackling invasive species? Then do please get in touch.

For more information on the project or to get involved please contact Beverley Lewis. E-mail Beverley.lewis@beacons-npa.gov.uk or telephone 07854997508.