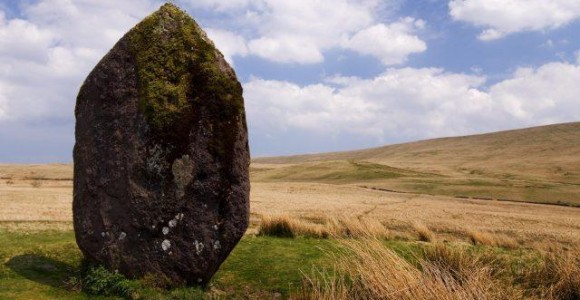 The Bronze Age is a period of prehistory that covers the period c.2300-800BC.  During this period humans made tools and implements out of copper alloy or Bronze, although they did not abandon earlier stone technology.  Evidence suggests that the climate for most of the Bronze Age was warmer than it is today, with steady population increase, with land that appears remote and marginal today being used by Bronze Age people.  It is believed that people in the Bronze Age lived in round houses constructed of wood, wattle and daub and thatch, clustered together in small groups, associated with stock pens and systems of small hand worked fields.

There are a significant number of Bronze Age sites within the Brecon Beacons National Park, including Standing Stones, Stone Circles and Round Cairns.  Find out more about these important sites below.

Standing Stones and Stone Circles – these Bronze Age sites are often iconic but remain enigmatic, because what their purpose or function was we do not know.  There have been many different suggestions and interpretations of their functions. Some sites appear to have burials associated with them, although it is not believe that this is their primary function.  Other sites align to the location of the sun and moon at solstices and equinoxes and so it has been suggested that they are calendars or observatories of some sort.

It is clear that the construction and erection of standing stones and
stone circles would require considerable effort from a significant number of people, and so these sites must have been important places to the communities who created them, it is therefore suggested that these sites has important ceremonial or ritual functions.  It is also possible that Standing Stones served as markers or signposts within the landscape, marking routeways or important places in the landscape.  There are many stone circles and standing stones within the Brecon Beacons National Park, including Maen Llia standing stone near Fan Llia, and Cerrig Duon stone circle on the Black Mountain.

Round Cairns – these are sites where Bronze Age people buried their dead.  Compared to the Neolithic burial, the Bronze Age focused much more on the individual rather than on collective or communal burials places such as Neolithic Chambered Tombs.  In the Bronze Age individual burials, or cremations held inside inverted funerary pots, were inserted into stone lined pits, called cists, dug into cleared ground. Grave goods such as pottery, weapons, beads and food offerings were also sometimes included.  Once interred the burials and cremations were then covered in a large mound of stone or earth, sometimes with kerb stones around the edge to contain the mound and sometimes with a surrounding ditch.  It does not appear that all Bronze Age people achieved such high status and prominent burials, and we do not know who was buried in this way or what happened to everyone else.  It may be that round cairns served as a burial site and memorial for the high status members of the community.

Bronze Age cairns, despite their age, are relatively common in upland landscapes like the Brecon Beacons National Park, and are often very visible, even when viewed from below, because they often occupy prominent positions on hilltops.  Some of the highest hilltops in the Brecon Beacons National Park, including Pen-y-Fan, Corn Du and Fan y Big are all crowned by the remains of Bronze Age Round Cairns. This suggests that round cairns may have also been important territorial markers, representing ownership, community and identity.