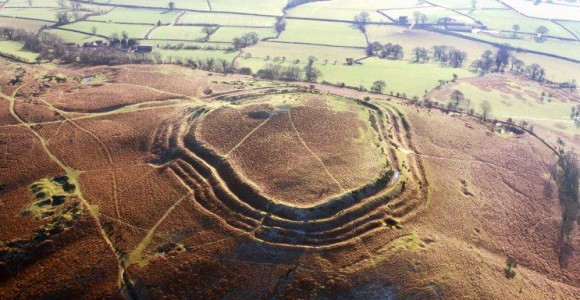 Image copyright of the RCAHMW

The Iron Age is the period in prehistory that covers the period c.800BC to the arrival of the Romans in Wales c.75AD.  During this period humans perfected the use of iron to make tools and implements.  It is a period that is often thought of as being a time of warring Celtic tribes, however, although defence was a factor in the construction of Iron Age Hillforts, if you read on below you will see that there was much more to these important sites.

Evidence suggests that from c.1000BC the climate in Britain began to deteriorate from the relative warmth of the early Bronze Age, this meant that by the Iron Age the climate was very much as we experience today, and upland areas that were farmed in the Bronze Age were no longer productive agricultural land.  It is believed that this resulted in increased competition for the well-drained lowland areas for farming, leading to increased tension, conflict and perhaps increased aggression between communities.

It is thought that Iron Age hillforts were first constructed in c.500BC and were utilised until the occupation of the area by the Romans, and possibly beyond.  Most hillforts that survive are relatively modest defended enclosures that would have consisted of a small number of round houses and associated structures e.g. stock pens and granaries, surrounded by a defensive ditch and a bank or revetment with a palisade structures on top.  However, hillforts came in various different shapes and sizes with some very large examples, and the structure of the defences depended on what materials were available, with stone, earth and timber (or a mixture of materials) all being used to construct ramparts.  Many hillfort sites also made use of natural defences provided by steep slopes or cliffs.  Entry to hillforts could only be gained through carefully constructed entrances and gateways that allowed entry to the hillfort to be carefully controlled.

The construction and maintenance of a hillfort would be a very large task and would require a highly organised and skilled workforce; it was not a task for those who lived in the hillfort alone but would have required a larger labour force.  This serves to illustrate the complex and organised society of the Iron Age.

Hillforts are not thought to be entirely defensive structures, although
defence inevitably played a role in their construction.  However, evidence from excavation suggests that by the later Iron Age hillforts were permanently occupied and may have become important political, social, religious and market centres, where specialist activities such as metal working were carried out, serving or controlling the local area.

The 27 Iron Age hillforts, and many more defended enclosures and settlements, within the Brecon Beacons National Park survive today in various states of preservation, and although now ruinous after 2,000 years of abandonment, many of them remain impressive and evocative sites.

Royal Commission on the Ancient and Historical monuments of Wales (1986) An Inventory of the Ancient Monuments in Brecknock (Brycheiniog):
Hill-forts and Roman Remains Pt. 2: Prehistoric and Roman Monuments London: Her Majesty’s Stationery Office.