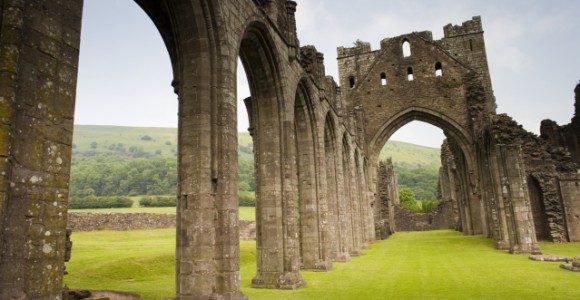 Oneof the most iconic early medieval sites within the Brecon Beacons National Park is the Crannog in Llangorse Lake. Crannogs are artificial islands built of timber and stones on which some form of settlement usually stood. Crannogs are more common to Ireland and Scotland, where they occur from prehistory through to the medieval period, but Llangorse Crannog is the only known example of a Crannog in Wales.  The island measures c.40m x c.30m, is constructed of timber piles, planks, stone,
rushes and peat, and excavations suggest that the site dates back to the 8th or 9th century.  The construction of the Crannog would have been a very large undertaking, requiring a large amount of stone, wood and a large labour force; it would have been an undertaking of a very powerful and wealthy person indeed.  Material recovered during the excavation of
the Crannog also point to the Crannog being occupied by a high status and wealthy individual, because in the waterlogged deposits a fragment of fine linen decorated with pictures of animals and plants depicted in linen and silk thread was found.  It is believed that this fragment of material may be part of a tunic or dress that was of very high quality and must have belonged to a wealthy and high status individual.  For these reasons it has been suggested that the Crannog may have been home to the early medieval Kings of Brycheiniog.  Despite being a very important, and possibly Royal site, evidence of burning suggests that the Crannog was destroyed by fire in the early 10th century

The Brecon Beacons National Park is also home the remains of many castles, these are some of the most visible and evocative archaeological remains in the National Park.  Many of these are Ringwork castles, simple timber structures surrounded by a large inner bank and outer ditch, and Motte and Bailey castles, with a wooden defensive structure built atop  a large steep sided mound (the motte) with associated structures contained within a large bank and ditch (or Bailey).  There are many examples of
these 11th century, Norman period, castles within the National Park,
which are still visible today as large flat topped mounds and earthwork
banks.  However, in the Norman period they would have been much more impressive and were used to control strategic positions, establish new centres of power and bring Norman control.  Other castles in the National Park survive as large stone built structures such as Carreg Cennen Castle and Tretower Castle.  Such castles were the home of wealthy nobles and acted as centres of political power and local government as well as defensive sites.  These large stone built castles often started life as simple earth and timber structures but were rebuilt and extended over many hundreds of years to leave the dramatic and often romantic ruins we see today.

The Brecon Beacons National Park is not just home to the remains of castles and residences of the wealthy and elite class, it also contains the remains to the homes and settlements of ordinary people.
This includes the remains of abandoned farmsteads or hafods in the
uplands, when a warmer climate allowed upland agriculture in areas where they are not found today, and areas in our villages and hamlets that were once covered by houses and gardens, but are now returned to pasture.