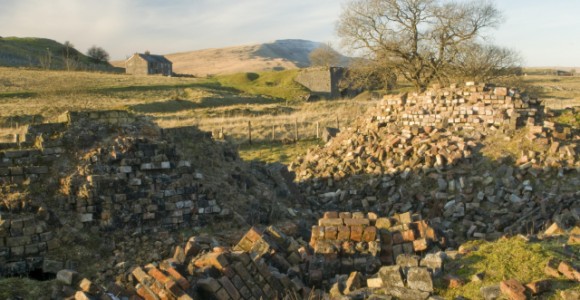 The remains of the post-medieval and industrial periods that survive within the Brecon Beacons National Park are visible for all see, from deserted settlements and abandoned farmsteads, rabbit farms and sheepfolds, to the quarries, kilns, canals and tramroads. These remains of our more recent past are numerous and perhaps speak more loudly to us than more ancient remains. Find out more about the post-medieval Brecon Beacons and its role in the industrial revolution below.

Seasonal use of the uplands for summer pasture continued into the post-medieval period, and numerous remains of farms, small settlements and their associated field systems and enclosures survive within the Brecon Beacons National Park, such as Y Graig near Gilwern the remains of a  post-medieval settlement.  The population across the post-medieval period led to a growing demand for meat and wool, and witnessed the growth of the importance of sheep farming, only increased by rapid industrial development and growth of the urban populations of South Wales.  The upland areas of the Brecon Beacons National Park became increasingly important for sheep farming, and the many drystone shelters, folds and shepherds’ huts built during this period still survive in the uplands today.

Another relatively common post medieval archaeological feature within the Brecon Beacons National Park are pillow mounds. These are flat topped earth mounds, often cigar shaped, with a series of internal stone lined tunnels, which were constructed as warrens for breeding rabbits.  Unlike today, rabbits were a very rare occurrence in the countryside for much of history, and demand for their meat and fur saw the breeding of rabbits develop across the period.  In parts of the Brecon Beacons National Park, such as on the Black Mountain, rabbit farms like Cefn Cûl were created, where the number of pillow mounds and the large areas devoted to rabbit farming suggest large scale commercial operations.  It may be that rabbit farming proved to be a profitable way to exploit marginal land.

The Brecon Beacons National Park lies to the north of the industrial heartland of the South Wales valleys, but many of the natural resources of this heavily industrialised area extend into the National Park, including iron ore, coal, silica and limestone, and the effects of the Industrial Revolution on the landscape of Brecon Beacons National Park are profound in places with surviving remains relating to the milling and processing of wool, quarrying and mineral extraction, the lime industry, ironmaking and the manufacture of fire bricks, paper and gunpowder.

Limestone was a vital raw material in the industrial period; it was burnt in limekilns to produce quicklime, which was then used in the production of lime-mortar for buildings and in agriculture to spread on the fields and produce lime wash.  Many examples of limekilns survive across the National Park, with particularly good examples at Penwyllt, Llanelli Hill and many examples along the Monmouthshire and Brecon Canal.  Limestone was also used in the ironmaking process, and limestone quarries within the Brecon Beacons National Park supplied ironworks in Blaenavon, Nantyglo, Hirwaun and in the Swansea Valley in the late 18th and 19th centuries.

None of the industries that thrived within the Brecon Beacons National Park could have developed or survived without the turnpike roads, railways, tramroads and canals that linked these remote and marginal areas to local towns, the markets of industrial South Wales and the wider world. Large sections of the Brecon Forest Tramroad, an extensive network of early railways on which waggons were pulled by teams on men and horses, still survive today in the uplands of the Great Forest and Cefn Cribarth. The Brecon Forest Tramroad connected industry across a large part of the National Park, from Sennybridge in the north to Ystradgynlais in the south; its construction was such a large undertaking that it bankrupted the ambitious tramroad builder, wealthy London merchant John Christie. Turnpike roads were built across the National Park in the 18th century.  They were important in the opening up and exploitation of mineral resources, and as they were often the only surfaced road to cross the mountains they were also vital communication routes.  Many of the major roads within the Brecon Beacons National Park were originally turnpike roads, now much altered, although many of the bridges and toll booths once associated with these turnpike roads do not survive.