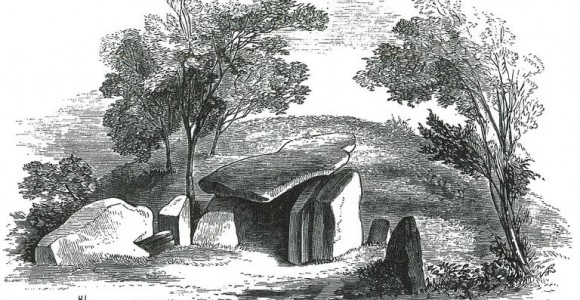 The Stone Age is a very long period of time that stretches from c.2 million years ago through to c.5000 years ago.  This is when the first people lived in the area of the Brecon Beacons National Park, and began to use its resources and leave their mark on the landscape.  In this section you can find out more about the Stone Age is the Brecon Beacons National Park, and what remains are left behind.

The Stone Age is divided into three eras:

The Palaeolithic (Old Stone Age) is the earliest period of the Stone Age and includes everything before the last Ice Age around 10,000 years ago;

During the Stone Age humans made tools and implements out of stone, such as arrow heads, axes and blades.

These people were highly skilled at exploiting the resources available
to them and would have moved across the uplands in small groups as part of their regular seasonal cycle, foraging for food and materials, and hunting animals.  Compared to people from other eras, Mesolithic people did not leave much evidence of their lives behind.

Farming first began in the Neolithic period with people using simple tools to break and stir the soil.  Neolithic people started to live more settled, or semi-settled, lives but did not abandon hunter-gathering immediately, and evidence suggests that they used hunter-gathering techniques to supplement their farming activities.  During the Neolithic woodland began to be managed in some areas through a combination of felling, burning and the grazing of animals.

Neolithic people have left more evidence behind of their activities in the Brecon Beacons National Park than the previous Stone Age people before them, because this was when permanent structures were built for the first time.  The oldest surviving man-made structures within the Brecon Beacons National Park are Neolithic Chambered Tombs.  These are the places where Neolithic people buried their dead in carefully constructed stone-lined and capped chambers within large stone and earth mounds, of a long trapezoidal shape, often with several entrances and passages
within them and a ritual forecourt at their entrance.  It is believed that these sites date to c.3500 BC and that they were used over a long period of time, and are the final resting place for many generations of people.

To create such a tomb would have involved a large amount of work and
would have involved moving large amounts of stone and earth, they were a large undertaking that would require a degree of societal organisation and must have been very important to the communities that built them.  During the period of their use chambered tomb would have served as more than just burial places or sites of ritual, they may also have been used as a status symbol and as territorial markers. After c.3000BC such chambered tombs were sealed for the last time and fell out of use.

These important Neolithic sites are very ancient, and have witnessed many changes in the landscape since they were first constructed many thousands of years ago; their appearance has also changed, and with the removal of the stones and earth that made up the mound over many thousands of years the remains that survive today are very different from how such sites would have appeared in the Neolithic.