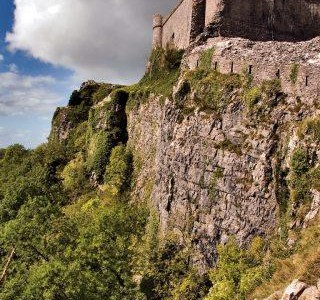 The stone castle that you see today was built by John Giffard and his son in c.1277 and was in English hands for much of its history.  The castle was damaged by Owain Glyndŵr’s rebellion and later during the Wars of the Roses in 1461, becoming the ruin you see today.  However, Carreg Cennen castle has many layers of history and an earlier, wooden castle built by the Welsh Prince Rhys Ap Gryffydd in the 12th century once stood on this site.

Although now a shadow of its former glory, imagine the skills and ingenuity required to build a castle here, and of all the men who toiled over hundreds of years in its construction and maintenance.  After the steep walk up to the castle, as you take in the spectacular views, think of this castle as a defensive stronghold and what a formidable task faced any medieval army that hoped to capture it.  Guards on duty in the gatehouse were ready to defend the castle and drop buckets of water and stones on the head of any intruders that made it past the castle’s other defences; the 300ft stone cliff on which it is built and a succession of large pits and drawbridges.  If you have a torch, then no visit to the castle is complete without a trip down the underground tunnel to see the natural cave in the rock under the castle.  This cave was used as a storeroom but was also the castle’s dungeon; imagine how it must have felt to be held captive within this rock prison.

In medieval times the castle, though a quiet and peaceful place today, was hub of activity.  There would have been many stables, workshops and kitchens that kept the castle going day to day.  Smells of baking bread and banquets being prepared in the castle kitchens would mingle with smoke from the workshops’ fires.  The clang of the blacksmith, the clatter of the horses, the music drifting from the Great Hall out to the courtyard below, and the shouts and chatter of the people that lived and worked here would make Carreg Cennen castle a noisy and bustling place to be.

The castle is in private ownership and is open to visitors.

Admission charges apply. WC, Café and Parking are available at the site.