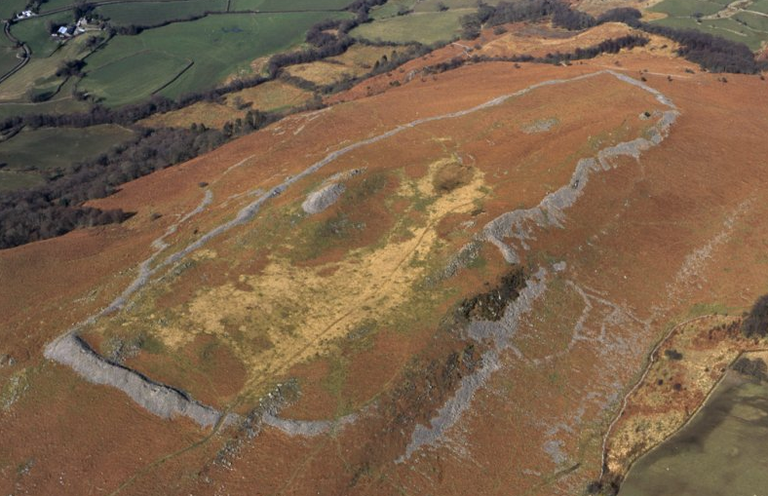 Y Garn Goch, a major Iron Age settlement site near the town of Llandeilo, nowadays feels quiet and remote. However approximately 2,500 years ago this hilltop would have been a thriving centre, where people lived and worked, where food was grown, and where goods were produced and were traded.  Its large stone defences, a large rubble bank today, once stood as stone-faced ramparts 10m high and 5m thick, and would have offered protection from natural dangers such as wild wolves and against other humans during periods of warfare.

There are actually the remains of two hillforts on this site; a smaller fort of Y Gaer Fach sits in the shadow if it’s much larger and impressive neighbour Y Gaer Fawr.   The smaller fort, Y Gaer Fach, encloses an area of c1.5ha, survives in a ruinous state and appears to be incomplete, perhaps abandoned part way through a programme of rebuilding that was never completed.  This fort is dwarfed in comparison with the nearby Gaer Fawr, with its enormous stone ramparts  and at least 6 separate entrances.

At c.11.2ha this is one of the largest hillforts in the whole of Wales. This impressive fort would have been a sight to behold, was the skyscraper of its day and a statement the power and status of those that build it.

Although there are many interpretations of the evidence Iron Age people left behind at this spectacular site, nobody is sure of the exact the purpose of these defended settlements. Were these sites simply defensive structures to be used for safety in times of trouble and warfare? Were they permanently occupied towns and centres of trade, or centres of religion and ritual? Did they serve a number of functions and were different things to different people?  Why not visit the sites, see for yourself and join us in our interpretation and speculation of the function of this magnificent Iron Age legacy?

Both forts are easily accessible from a small car park at the base of the hill, and the well-trod path will take you first to fort Y Gaer Fach and then on to Y Gaer Fawr.  As you take the path up to the forts imagine the many people who have made this journey in prehistoric times, to visit the fort, to take refuge, to trade, find food and water, or shelter from the night on their travels.  Both forts occupy a hilltop and the views from the top are superb.  Any visitor should take a moment to experience these views and remember that our ancestors stood in the same spot 2,500 years ago and would have looked out on a very similar view; take away the modern field boundaries, farms and bridges and imagine the Iron Age landscape, of the river flowing down an open valley with hills rising in the distance, with perhaps few small scattered lowland settlements of roundhouses, animal pens and cultivated fields. This truly is a spot where the past feels closer than you think.