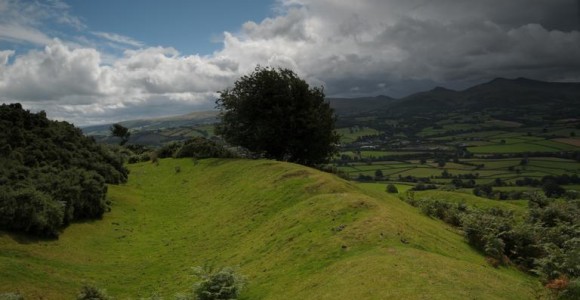 The hillfort remains visible today date back to the Iron Age (c.800BC to 75AD), although there is some evidence of possible earlier occupation on the site.  The ramparts, which are rounded earthwork banks and ditches today, would once have been impressive stone and earth revetments with a wooden defensive palisade built on top, allowing those who occupied the hillfort to defend themselves and proving a formidable obstacle to anyone attempting to attack the settlement.  Entry to the interior of the hillfort was gained through a single well-guarded entrance on the south-east side of the hillfort.

Although little survives today, above ground, of the round houses, stock pens and granaries that once occupied the interior of the hillfort, during the Iron Age Pen-y-Crug would have been a very busy place, where people lived, worked, farmed and traded.  It may have even been an important political, social and religious centre for the local area.

It is clear to see why Iron Age peoples chose to build a defendable settlement here. The hill has extensive views of the central Brecon Beacons, and also views to a number of neighbouring hillforts including Coed Fenni Fach on the adjacent (now wooded) hill and to Twyn y Gaer on Mynydd Illtud on the other side of the valley.

In the 18th and 19th century areas of the hill on which Pen-y-Crug sits was occupied by a brick and tile works, and worked as a tile quarry; complexes of leats, old quarry workings and clay pits, trackways and kilns hint at this role of the Crug as a locally important industrial site.

Today the site is situated on common land and is owned and managed by the Brecon Beacons National Park Authority.