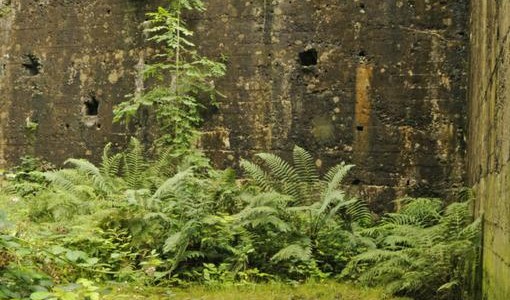 The Glynneath Gunpowder Works were establish on the site in
1857 to produce black powder for use in mining and quarrying, and operated until the early 1930s, although the works had many different owners over this time.  Initially you may think that this steep sided valley seems like a strange place to build and operate a manufacturing
business, however, the location was actually well suited to the manufacture of gunpowder.  The manufacture of gunpowder
is a very dangerous process and there is a very high risk of explosion, however the site is large and remote, stretching over a mile and a half along the north bank of the River and covering an area of 180ha.  This provided plenty of space between each factory building to allow any explosions to be localised.

Despite its remote location the site is well connected to transport links including the Neath and Swansea Canal and the Vale of Neath Railway.  The River Mellte provides a useful source of energy to power waterwheels and turbines that powered the manufacturing processes.  The topography of the valley was also very useful. Its steep sides allowed the factory buildings to be built into the side of the hill and large banks between buildings constructed protruding from the hillside, helping to stabilise the buildings and reduce the impact of any explosions.  The site was also in close proximity to sources of the raw material required for the manufacture of gunpowder, charcoal, sulphur and salt petre (potassium nitrate).

Despite many years of successful operation, the factory ceased production in 1931 when black powder was prohibited from use in coal mines, and demand fell.  The site was completely abandoned by 1940, and many of the building were burnt out and demolished because of the risk of accidental explosion they posed.  It is for this reason that the factory buildings only survive today as ruins. However, enough of the buildings survive to hint at the scale of the operations at the factory.  You can walk along a flat and level path, which is the remains of one of the tramroads that moved materials around the factory.  Raw materials came in at the bottom of the site, and as they moved through the works they underwent various different processes so that the finished black powder came out of the top of the works.  The quality of the black powder was tested by using it to fire a cannon, now in Brecon Museum, and only if the powder propelled a cannon ball a specific distance did it make the grade.

The line of the old tramroad will take you through the works and past the remains of each of the factory buildings, some of these will be hard to spot, very overgrown and hidden in the trees.  Other remains are more obvious, such as the large concrete Corning House where cakes of granulated powder were broken up by wooden hammers. You will notice that many of the stone and masonry structures that you can see today only have three walls remaining, this is because the roof and the fourth wall would have been made of wood to allow any explosion to move up and out of the building and limit any damage to the expensive machinery.  As well as stone and masonry structures that once housed the machinery of the works there are also extensive remains on site relating to the water management system, including leats, aqueducts, weirs and hydraulic pipes.

Safety was paramount, and all possible precautions to avoid explosions were taken.  Employees had to change into work clothes before entering the potentially dangerous areas of factory, this included leather slippers fastened with wooden pegs to wear over shoes and boots to prevent sparks, and trousers were not allowed pockets or turn-ups to prevent grit to be carried into the works in case it caused sparks.  Large areas of the works were regularly dowsed with water to keep them damp and prevent the risk of explosion, called ‘Liquoring’, and if an explosion occurred in one building other areas of the works would automatically be drenched in water in order to prevent the explosion spreading.  Despite these safety precautions many explosions were recorded at the mill.

As you stroll through the site imagine what it would have been like for the people who worked here. In its heyday the Gunpowder Works employed c65-70 people, mostly men.  Working in the gunpowder works was a dangerous and dirty job and despite the dangerous conditions in which people worked and long work days from 7am to 5pm, the factory workers did not earn any more than workers in any other local industries.  However, the company did provide schoolhouse in the village to educate employees’ children, provided some accommodation for staff and allowed employees to build and maintain gardens on the spacious gunpowder works site.

The Gunpowder Works are owned and managed by the Brecon Beacons National Park Authority and are easily accessible from Pontneddfechen and Dinas Rock Carpark.

Please note: For the safety of the public, whilst conservation works are undertaken, sections of the Gunpowder works are currently closed to public access.