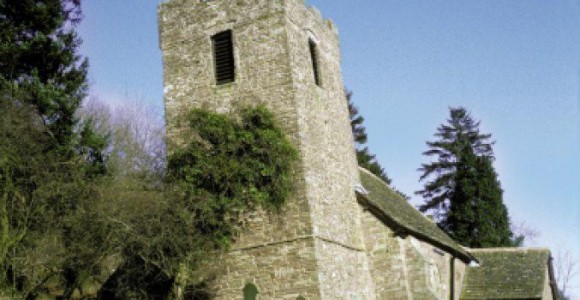 Nestled beneath a spur of the nearby Hatterall Hill, the church’s unusual form is a result of a landslide, which local tradition says was caused by a terrible earthquake during Christ’s crucifixion when darkness descended.  The landslide was real enough, but it was the result, not of an act of God, but due to legacy of the last Ice Age.  10,000 years ago, as the climate warmed and the ice retreated, a classic U-shaped glacial valley was revealed, with steep and unstable valley walls.  It is the shifting of the valley sides that led to a great landslide.  Above the church on the skyline you can still see a great gash in the side of the mountain where the landslide came crashing down.  It is this feature that gives name to the church and the village itself, Cwmyoy being the Valley of the Yoke.

The church that you see today was built of stone revealed by the landslide and it is built on top of the landslide drift.  This is an unstable ground surface on which to build, and subsequent movement and settlement of the earth beneath the church has caused the church building to warp and twist.  Look closely and you will see that the nave bows out horizontally, the walls are crooked and the top of the tower leans out over its foundations by 6ft!  To prevent further movement and ultimately the collapse of this extraordinary building the tower is now supported by a stone buttress and the walls are supported by internal metal rods.

Only further adding to the importance of Cwmyoy church is the 13th century carved stone representation of Christ on the Cross.  This rare medieval survival is thought to be one of the crosses from along the Pilgrim’s Way to St. David.  It was found on a nearby farm in 1871 and taken first to the Vicarage garden and then to the church.  It has had a chequered history, being stolen from the church in 1967 and only returned after it was recognised by a member of staff from the British Museum who spotted it for sale in an antique shop.  Today the cross is secured to the floor of the church, where it is intended that it will remain, and because the Church is located along the modern route of the Cistercian Way, the cross can be visited by a modern generation of travellers.