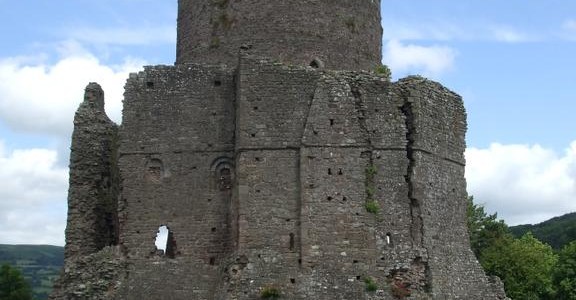 Tretower Castle sits in a strategic position on the north bank of the River Usk where the road through the Usk valley branches towards Talgarth and the Wye valley;  a strong and commanding position from which any medieval Lord could exercise control over his land.  The castle remains today date from the 13th century, although the original castle on the site was a Norman Motte and Bailey castle, a large earthen mound topped with wooden defences, built during the Norman conquest of the ancient Kingdom of Brycheiniog, when powerful Norman nobles settled in Brecon and the surrounding area to establish their control.  This castle was modified many times in its history, being rebuilt in stone in the mid 12th century, and then in the 13th the castle was extensively remodelled when the great tower, which dominates the site today, was built.

Tretower Castle was not only for defence, the quality of the ornamental stone work exceeds what is required for defensive purposes alone,
ranking it amongst the best castles in Wales; for some of its history at least, this castle was a prized domestic residence and a status symbol. Although in ruins today the castle remains are a powerful reminder of the wealth, status and influence of the Lords of Tretower during the medieval period.  By 1400 the domestic residence had moved to Tretower
Court, but the Castle survived and continued to be used as a military fortress in times of war, such as during Owain Glyn Dŵr’s uprising.

Tretower Court took over from the Castle as a place of residence in the 14th century.  It was held by the Vaughan family through to the 18th century, one of the richest families in Wales, and they extended and adapted the buildings to meet their tastes and needs for over 300 years.  At the end of the 18th century Tretower court became a farm, part of the building was even used as a pigsty, and these remarkable buildings declined and deteriorated until they were saved from neglect and restored in the 20th century.  Today visitors to Tretower Court can step back in time and experience the house as it would have been in its heyday in the 15th century, exploring the great hall, the reconstructed medieval garden and even the working kitchen, as well as exploring the earlier history of the site and the castles ruins.

The village of Tretower lies just off the A479 to the north-west of Crickhowell.  Parking is available in the village. Tretower Castle and Court are Cadw guardianship sites, they are open to visitors and admission charges apply.