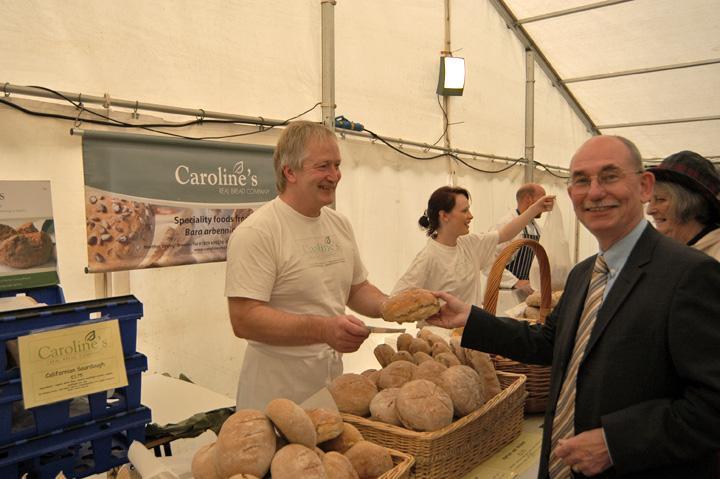 Minister for Economy and Transport, Dr Brian Gibbons along with Chris Gledhill, Chief Executive for Brecon Beacons National Park Authority (BBNPA), Mrs Mary Taylor, Chairman for BBNPA and the Mayor of Hay, Mr Gareth Ratcliffe declared the Festival officially open under a shroud of umbrellas at the Memorial Car Park in Hay on Wye.  Transformed into a dazzling food and drink extravaganza bustling with activity, more than 45 stalls offered everything from the finest quality ice-cream, cheeses, pastries, cakes, and other tantalising treats to freshly-sourced local beef, lamb and venison.

Dr Gibbons welcomed the opportunity to officially open Hay Food Festival and support the drive for locally produced food.  He said:  “The Welsh Assembly Government is proud to support food festivals throughout Wales, as they play an important role in developing a Welsh Food Culture.”  He then went on to thank the Brecon Beacons National Park Authority for its role in supporting Welsh food and wished them every success for their ongoing celebrations for their 50th Anniversary.

Later during the day Dr Gibbons also commented on his new ministerial position, which now includes the agri-food sector by saying: “It’s a very exciting role. Food production was traditionally a part of the agriculture brief but it’s a good idea to bring it into the economic portfolio.  The first thing for me is to see the range of products available and try to promote Welsh food brands, keeping an eye out for the first opportunity to do it in an official capacity.”

And that’s just what he did when he and Chris Gledhill sampled the infamous Penderyn Whiskey – the only Welsh Whiskey made by the appropriately named Welsh Whiskey Company in the village of Penderyn in the southern Brecon Beacons from which the spirit takes its name.

The Minister also showed a keen interest in the Breconshire Brewery stall where he tasted Golden Bannau a new brew created by the Brecon-based business to mark the 50th anniversary of the Brecon Beacons National Park Authority (BBNPA) this year.

Breconshire Brewery Head Brewer Justin ‘Buster’ Grant said: “The Golden Bannau beer is based on a beer that would have been available 50 years ago to mark the BBNPA anniversary  – I think the taste has been improved, but if not it’s my fault!”

Recently re-elected BBNPA Chairman Mary Taylor praised the festival saying: “Hay Food Festival has developed enormously since its inception six years ago and is an enormous asset to the national park and testament to the impact that local food has on the economy.”

Andrew Powell, Catering Manager for Brecon Beacons National Park Authority and organiser of the event said:  “It was great to see the whole town buzzing on Saturday; the Memorial Car Park was packed with a record number of quality local food suppliers and producers, school choirs, musicians and more importantly lots of enthusiastic shoppers!

“The sheer quality of the produce displayed on the market ensures that Hay Food Festival just goes from strength to strength. Many of the stallholders have already indicated that they will be back next year, and I look forward to seeing many of them at our Brecon Food Festival on 6th October.”