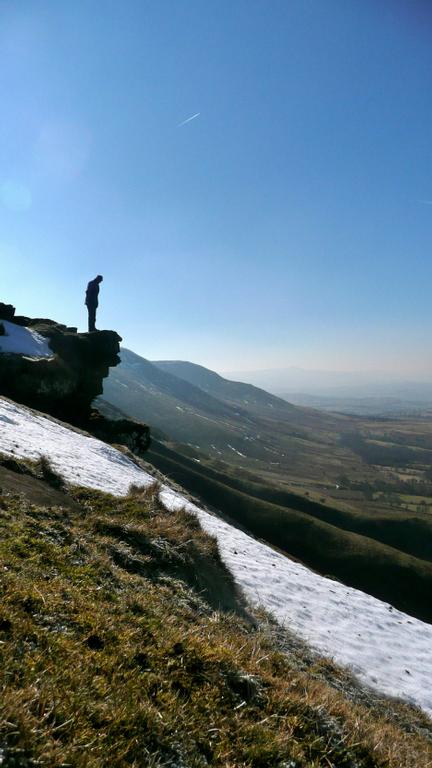 Last week organisers of the Crickhowell Walking Festival Photography Competition announced the winners of its first annual photographic competitions – judging photographs that were taken from the Walking Festival back in February. First prize went to Steve Haslam of Blwch with a dramatic image of his father, Tony, on the North West escarpment of the Black Mountains.  Steve will take home a cash prize of £50 kindly donated by festival organisers.

The judging took place at the Gliffaes Country House Hotel, near Crickhowell, led by renowned landscape photographer, Philip Veale, who lives locally.  Philip was joined by Gary Short, Graphic Designer for Brecon Beacons National Park Authority and Samantha Games, PR Officer who also works at the Park Authority. With 160 photographs to peruse, the judging took nearly two hours to complete as the judges looked at criteria like quality of photograph, as well as capturing the beauty and essence of walking in the National Park.

The runner up for second prize was Humphrey Thompson from Winchester with a lovely picture of walkers on Gilwern Hill as part of a Glydach Gorge walk. Third prize went to Mike Chamberlain of Crickhowell with his shot of walkers heading up Sugarloaf Mountain.

Readers can see all the short listed photos by visiting www.CrickhowellFestival.com (Go to photos and then click on the large arrow in the middle of the judges, wait a few seconds and you will be rewarded by a captivating slide show.)

Keen interest is already being shown for the 2011 Crickhowell Walking Festival which will run from 26th February to 6th March.  To go on the mailing list for your free programme (to be sent out in November) call CRiC on 01873 811970 or send your details to CRiC, Beaufort St, Crickhowell, NP8 1BN or email walks@Crickowellinfo.org.uk

Judging the completion – The Judges in action from left to right: r to l Philip Veale, Gary Short, Samantha Games

Prize award to Steve Haslam – David Thomas, Festival Organiser (right) presenting Steve Haslam (left) with a framed copy of his winning photo, together with a cheque for £50. The picture was taken in the CRiC Oriel Gallery with an exhibition of Philip Veale’s work in the background.