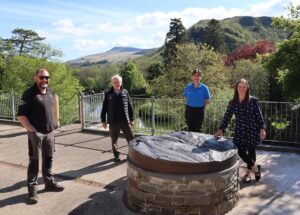 Fforest Fawr UNESCO Global Geopark have opened a new Geopark Discovery Point at Craig-y-nos Country Park in the Upper Swansea Valley. Stephanie Evans, Brecon Beacons National Park Authority’s Transition Director, officially opened the Discovery Point last week during what would have been Geofest: a two-week festival of the Geopark that had to be cancelled due to the pandemic. The Discovery Point was created as a starting point for visitors to plan their exploration of the Geopark, which covers the Western half of the Brecon Beacons National Park.

Situated on the outdoor terrace at Craig-y-nos, the Geopark Discovery Point consists of a tactile bronze relief model, three informative monoliths and three interpretation tables.  The bronze model, designed by local artist Rubin Eynon, depicts the mountains and valleys of the Geopark around Craig-y-nos. Whilst the monoliths, also designed by Rubin, raise awareness and understanding of the Geoparks UNESCO designation and introduces visitors to the Geopark’s key stories of ice, industry and people. The interpretation tables, the first of their kind in the Park, were designed by Ingleby Davies Design, with each telling a different Geopark story. You can journey from the Big Bang to present day at the timeline game table where you will encounter millions of years of adventure, learn about how Cribarth (the hill above Craig-y-nos) was shaped by industry and find out how humans re-made the Geopark’s landscape over the centuries. 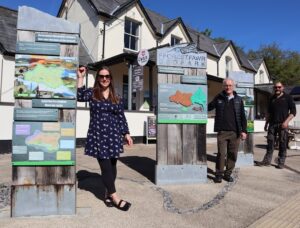 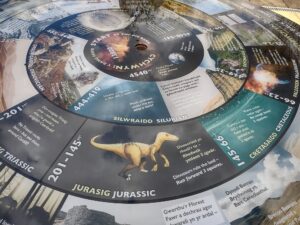 Stephanie Evans, National Park Authority Transition Director said:
“Not everyone is aware that the western half of our Park is shared with a UNESCO Global Geopark; an area of geological, cultural and heritage significance. This new Geopark Discovery Point introduces people to that important designation and demonstrates that there is much more to be explored here than just Pen y Fan. We hope that that this summer, visitors and residents alike will spend time exploring new places here in the Geopark of the National Park.”